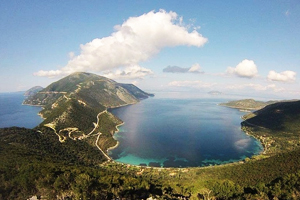 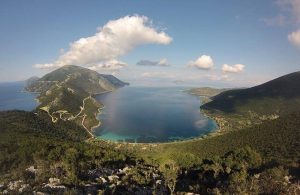 Ithaca is a small island in the Ionic sea. Odysseus, king of ancient Ithaca, was one of the Greek leaders that set out to wage war on Troy. Odysseus has to endure the wrath of the gods, and as a punishment his way back home takes ten long years. Each time he approached his homeland Ithaca, the island vanished. Homer described all his adventures and trials.

When you set out on your journey to Ithaca,
pray that the road is long,
full of adventure, full of knowledge.
The Lestrygonians and the Cyclops,
the angry Poseidon — do not fear them:
You will never find such as these on your path,
if your thoughts remain lofty, if a fine
emotion touches your spirit and your body.
The Lestrygonians and the Cyclops,
the fierce Poseidon you will never encounter,
if you do not carry them within your soul,
if your soul does not set them up before you.

Pray that the road is long.
That the summer mornings are many, when,
with such pleasure, with such joy
you will enter ports seen for the first time;
stop at Phoenician markets,
and purchase fine merchandise,
mother-of-pearl and coral, amber and ebony,
and sensual perfumes of all kinds,
as many sensual perfumes as you can;
visit many Egyptian cities,
to learn and learn from scholars.

Always keep Ithaca in your mind.
To arrive there is your ultimate goal.
But do not hurry the voyage at all.
It is better to let it last for many years;
and to anchor at the island when you are old,
rich with all you have gained on the way,
not expecting that Ithaca will offer you riches.

Ithaca has given you the beautiful voyage.
Without her you would have never set out on the road.
She has nothing more to give you.

And if you find her poor, Ithaca has not deceived you.
Wise as you have become, with so much experience,
you must already have understood what Ithacas mean. 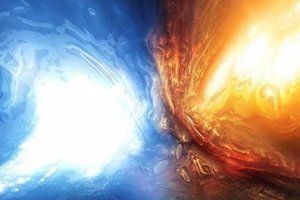 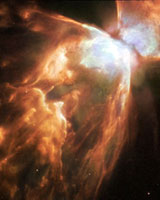 Robert Frost- One of the greatest American poets, Frost was born and died in Boston (1874-1963). Frost was a humanist who portrayed delicate nuances of life, human values and plain simple truths, using a simple, ordinary language. In many of his songs, like “Fire and Ice,” Frost applies his unique poetic symbolism as a vehicle to philosophical and religious thought.

Some say the world will end in fire,
Some say in ice.
From what I’ve tasted of desire
I hold with those who favor fire.
But if it had to perish twice,
I think I know enough of hate
To say that for destruction ice
Is also great
And would suffice.