Tamar Paikes, a plastic artist resides and creates in Jerusalem 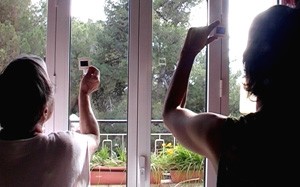 These days, concluding several years of labor, Tamar has finished “Cardboard Squares”, a documentary film relating the way she coped with the complex experience of grief which befell on her family; a family who lost a father and two older brothers. Her father Michael Paikes was killed during the Six Day war, her eldest brother Yoni was killed in Ramat Ha’Golan during the Yom Kipur war, and Daniel, her second brother, fell while climbing the top of the Monte -Blanc. The movie tells the personal story of Tamar and her family, while simultaneously raising questions of memorialization and memory on an overall level as well, concerning our Israeli society, which has been exposed to grief throughout its existence and development.
During this film we accompany Tamar’s journey in the footsteps of her Father and two brothers, as she meets family members and friends from the past, while sharing with us her fears and misgivings through words and artistic creation.
Her mother Arnona acts as a central axis in this film, an extraordinary woman who held, with all her power, a family that grew smaller and smaller with each catastrophe throughout the years. After all the men in the family died, she was left with two daughters.
Tamar relates her story: “throughout the years, I lived an allegedly normal life, as if there is no grief. Only during the making of this film did I understand that every step I make stems from a ceaseless dialogue with the dead. Throughout the four years of working on this movie, I’ve been trying to unveil the atmosphere of mystery and vagueness surrounding the residence of death within the house I grew up in. After years of living in the shadow of a silence accompanying the grief in my house, in this movie I try to confront between the repression dictated by my mother and my basic existential need to talk and share my pain. The movie moves between two poles, on the one end is a widow and loving mother, bereaved, cynical, disillusioned, and angry, keeping at a distance any national symbols that appropriate grief and the dead into the heart of the nation. A woman who espouses the idea that life belongs to life, believing that there is no use to fiddle with the dead. I stand on the opposite pole, grappling, for the first time in my life, with the classical formula of memory formation: a visit to the cemetery, touring the location where the brother fell, and meeting friends of the death. The movie examines the two alternatives.
I’m constantly attempting to connect the disjoint fragments, and to find my own path, this is a necessary condition for my sanity. I lost my father before I took my first breath in this world. I never chose this or what happened later. I want to meet the world again on my own terms”.
Tamar participated in different projects of the ‘Raz-Ram’ foundation as a guiding artist. We look forward to the screening of the movie and the significant debate it will generate.