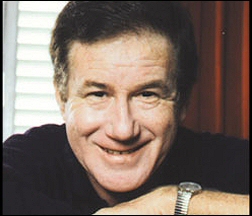 Ehud Manor, one of the prominent song-writers in Israel, was born in 1941, in Binyamina, of which he wrote (“Days of Binyamina”). His father, Israel Winer, died when Ehud was 15 years old.
In 1962 he started working in Kol-Israel as a musical editor and host in many programs. He met his wife, the singer Ofra Fux, while he studied in New York. They had three children: Liby, Yehuda and Galy. Ehud wrote a song for each of his children. Ehud Manor, recipient of Israel Prize, 1998, was Israel’s most prolific song writer. Many of his songs are already considered classics.
His brother Yehuda was killed during the war of attrition. The song “My Young Brother Yehuda” was written in his memory.
Ehud Manor wrote the words to “Dear Darkness” to a tune by the brothers Aviv and Aric Livnat. The song was recorded in their first disk, “The One You Don’t See.”
Manor wrote 1250 songs in Hebrew and translated 620 songs from other languages.
He died at the age of 64.