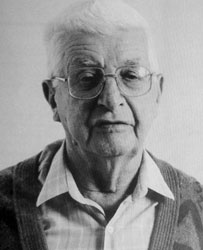 Abel Ehrlich was born in Cranz, East Prussia, in 1915. He studied violin and began composing as a child. In 1934 he fled from Nazi Germany to Yugoslavia and pursued music studies in Zagreb. As a jew, he was forced to leave Yugoslavia and immigrated to Israel after a short stay in Albania. In Israel he continued his studies at the Eretz-Israel Conservatory in Jerusalem – his violin teachers were Emil Hauser and Tzvi Rothenberg and his composition teacher was Prof. Shlomo Rosovsky.

His interest in Arab and Eastern Music and later, after attending the Darmstadt Summer Courses, in adapting serial methods in his own way, did not force national or folkloric disguise. The simplicity and directness in the way he presents his ideas shows his respect for the act of creation and requires a careful listening.

Ehrlich was awarded the ACUM Prize (8 times), the Liberson Prize (3 times) and the Prime Minister’s Prize for Israeli Composers. In 1972 was awarded a prize of the Alte Kirche Foundation, Boswil, Switzerland, for his work ARPMUSIC. Abel Ehrlich was, in 1997, recepient of the Israel Prize for Music.
Abel Ehrlich died in Tel Aviv on October 30th, 2003.