“The Gat Way”- In response to a request from Kiryat-Gat municipal officials, the Foundation decided to initiate an activity which would integrate children and youth from different backgrounds – “Sabras”, Russian new immigrants, and Ethiopian new immigrants – through creative projects. The multi-cultural atmosphere, which is so dominant in the city and is sometimes at the root of different kinds of tensions, is being channeled into a more productive outlet, which is intended to improve the appearance of the city and make an interesting, artistic contribution to the community. In building this Seeds of Creation activity, creative teams are being put together which will include an artist and a child or a number of children from different backgrounds, that will provide the framework for personal and group art instruction. The art works that are created – in all areas of the visual arts – will be displayed in the city at the end of the year, as part of the “Gat Way” program of introducing art into the city. 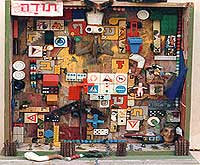 “Drawers of the Heart”
As part of the “Gat Way” project, participants collected different objects (pictures, objects from the home, old toys, memorabilia from their families, etc.) for the “drawers of their hearts”. Using these objects, they glued, painted and assembled their creations under the guidance of artists from the field of the plastic arts. The process of collecting and assembling the objects raised memories related to the collected objects, which were also expressed in writing and drama projects intended to open those “drawers of the heart”.