The Hurfeish Seed of Creation 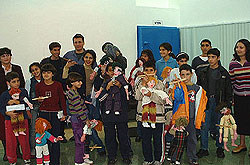 Garden of the Spring- Background
In the ancient Druse village of Hurfeish, located in the Western Galilee, the Raz-Ram Foundation established a joint project for orphaned children from Hurfeish and the Druse villages of Cisra, Bet-Jan and Usafiya. The project took place in a local community center in Hurfeish and also included children from a boarding school in the village, as well as other orphaned Druse children and children who were removed from dysfunctional homes.

As part of the project, the participants learned and carried out the entire process of building marionette puppets – preparing plaster models, sculpting, assembling the different pieces, painting the facial features, sewing the costumes, and more. The children also participated in a wide range of other creative activities, attended a special musical performance, and participated in a rhythm/musical activity. A group of Conservative rabbis from New York visited one of the activities, at the initiative of the Jewish Agency, which also supports the project. The rabbis, together with the children, created a commemorative statue and also visited the memorial for fallen Druse soldiers in the village.

The final exhibition for the project included a ceremony marking the laying of the cornerstone for the “Garden of the Spring” park. During the celebration, which was sponsored by the Minister of Culture, children from the Foundation’s Seeds of Creation activities around the country came to Hurfeish to see the exhibition of marionettes and take part in a wide variety of creative projects. Among the visitors were Beduin children from Rahat, Arab children from Jaffa, new immigrant children from Rehovoth and Rishon le Zion, Ethiopian children from Absorption Centers in Safed, and children from boarding schools in Jerusalem and Tel-Aviv. In an activity designed to give free reign to their creativity and imaginations, the children faced the Wadi where the village’s historic spring is set, and each one drew his own personal vision and designed the landscape of his spirit. 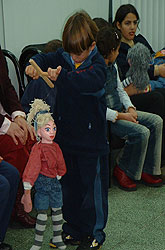 The Garden of the Spring site, which is part of the local Druse heritage, will be incorporated into the design of the future project, as a memorial park in memory of the fallen Druse soldiers. The park will comprise the materials inherent to the site: water, wood, earth, stone, etc., and will serve as a center for activities related to creativity and the local heritage. It will be a meeting place for inter-cultural gatherings, based on the values of peace and co-existence, and honoring individual and collective memory.

Other activities of this Seeds of Creation:
“Orphans without Borders”
The Babushkas of Bet Jan, Maghar, Hurfeish and Cisra Seminar:
The Galilee – A Culture of Memory and Peace
Garden of the Spring
Bells of Hurfeish